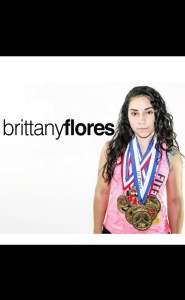 From tenth place to breaking records, Palo Alto College’s very own Brittany Flores is making her mark in the powerlifting world.

At the beginning of this November, Flores traveled to Las Vegas, Nevada, to compete in the International Powerlifting Organization (IPO) World Powerlifting Championship. She placed first and broke three world records in bench with 176.34 pounds, deadlift with 374.68 pounds, and total with 837.52 pounds.

Flores’ passion for powerlifting started at age 15 as a freshman at Pearsall High School. She found the weight room and “liked the fit.” Since then, Flores has competed in more than 50 competitions.

Although a world champion now, Flores was not always the best lifter.

“I used to place eighth and tenth,” she said.

However, determination and practice has brought Flores to where she is now.

Flores said the most difficult part about powerlifting is blocking out the competition.

“When I first started, I had mental blocks. I would see competition and look them up online and ask my coach about their stats,” Flores said.

Flores’ teammate and coach, Gary Hunter, said, “[Brittany’s] incredibly determined. She wants to be the best. She pushes herself harder than anybody I’ve seen.”

Flores and Hunter have known each other for two years since crossing paths in PAC’s Fitness Center.

Traveling is not necessary for the majority of competitions. However, for the ones that do require travel, they come with a big price tag. While attending classes at PAC as a Kinesiology major and working at the Fitness Center on campus, Flores still finds time to organize ways to fund her trips.

Flores sold post/pre workout protein cookies she baked for $1 at Joe’s Gym on the city’s North Side. While selling cookies, Flores’ friends and family also helped her raise money for travel by having fundraisers and a GoFundMe page on Facebook. Thanks to the fundraisers and extra donations from friends, family and strangers, Flores flew to Vegas.

Powerlifting is not a rare interest in the Flores family. Flores’ two older brothers and mother all powerlifted in high school. Flores said her inspiration was her mother.

“I’m just trying to finish her footsteps that she tried to start and trying to make her as proud as I can,” said Flores.

Flores does not plan on stopping her powerlifting career. After receiving her Kinesiology degree, Flores aspires to be a professional trainer and lifting coach. Ultimately, she hopes to have a gym of her own.